tvis > News > With the speed of ice: from the satellite images Landsat created map of the world’s glaciers

With the speed of ice: from the satellite images Landsat created map of the world’s glaciers

At the end of 2016, a large team that united scientists from the NSIDC (National Center of Snow and Ice), the Laboratory of the US Jet Movement and several American and European universities, presented the results of a large-scale project on the monitoring of glaciers on the whole globe. The project was based on data from the American remote sensing satellite LandSat-8, which is able to remove any part of the earth’s surface every 16 days. The Landsat-8 equipment allows you to remove the surface of the Earth in 11 spectral ranges, among which one is panchromatic, one in the ultraviolet range of the spectrum and three channels in the visible, neighboring infrared and thermal parts of the spectrum. To assess the movement of glaciers in previous years, satellite images of Landsat-7 were used. The map clearly demonstrates how ice masses accumulate, in which direction and at what speed glaciers are moving.

Also shows the dynamics of glacier boundaries. It has been established that the speed of ice masses varies from 3-4 to 800 meters per year. These phenomena have long been known to specialists-glacial, but only today, thanks to the satellite shooting of Landsat, it became possible to assess their global scale. To explore the speed of the glacier movement, scientists used space images obtained at different times for the same terrain, as well as software packages with the ability to automatically determine changes in the territory (Change Detection), including Erdas Imagine. On the covering glaciers of the Arctic and Antarctic, often lacks landmarks, or reference points, which can determine the movement of ice masses. Therefore, scientists offered an original approach to recognizing the textures of the glaciers, which they called “Ice wrinkles”. In fact, they are formed by a special arrangement of cracks, folds of glaciers and moraine – savings of rocks on the surface of the ice. 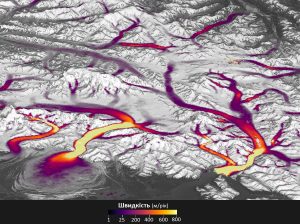 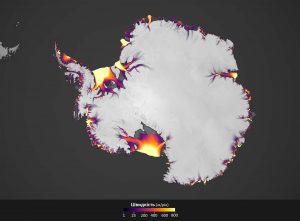 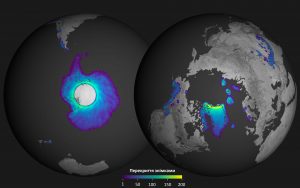