The recent fighting near Avdiivka was the fiercest period of the war in the Donbass after the battle of Debaltseve in February 2015. Using DigitalGlobe satellite images for January 20, 28 and 31, 2017, Belligcat analyzed the positions of the separatist-controlled Yasynuvata and the consequences of the shelling, most likely by the Armed Forces of Ukraine. On the satellite image from January 31, 2017, no Ukrainian positions were found near Avdiivka. It partially shows Yasynuvata, Makeyevka, the eastern part of Donetsk and other districts east of the Ukrainian government-controlled Avdiivka. Traces of outgoing (marked in gray) and entrance (marked in red) fire near the Yasynuvata water treatment plant and coke plant (marked in blue).

In one photo from the east side of the water treatment plant, two artillery guns are deciphered between the controlled separatists Yasynuvata and Makeyevka. These weapons are located in dangerous proximity to an important element of infrastructure that endangers civilians and deprives them of access to water.

Both guns are aimed to the west, in the direction of the Ukrainian government-controlled Avdiivka. 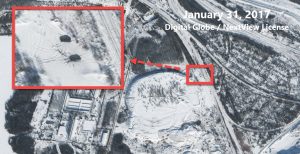 To the south of this position, at about the same distance from the water treatment plant, is another separatist position, which houses several field artillery guns. These weapons are also likely to be deployed to the west. 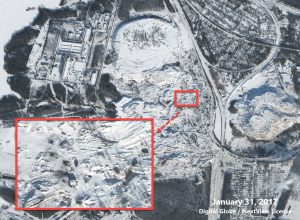 To the northeast of these two positions you can see two towing samples of weapons, one of which is fixed in the stowed position behind the truck. 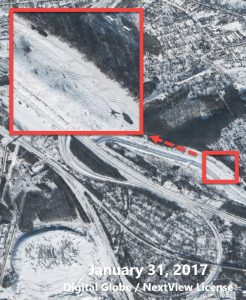 Three more towed samples of weapons with trucks are deciphered from the south-eastern side of the Yasynuvata Coke Plant, as well as from the western side of the Guards District in the north of Makeyevka (which was controlled by the separatists at the time). As in the previous position, the artillery was deployed to the west, in the direction of government-controlled Avdiivka.

Further south of the Yasynuvata Coke Plant, two more firing positions can be seen. On one of them several guns are oriented to the west, on the other there are charred traces of firing in the western direction. 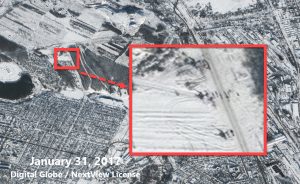 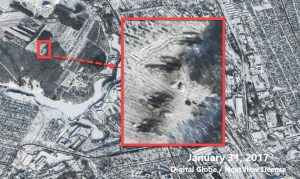 Although the artillery cannons themselves are not visible, it is obvious that the traces are located only a few hundred meters from a residential area, school, church, hospital and supermarket in the east of Donetsk. These positions were captured in six videos showing Gradiv firing in the direction of Avdiivka. 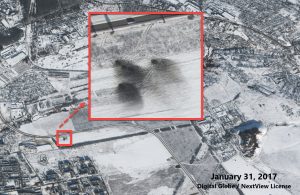 In the photo from January 31, 2017 on all territory controlled by separatists it is visible a set of new funnels which are absent in pictures from January 20 and 28. 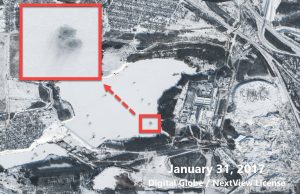 West of the water treatment plant, south of the Yasynuvata railway station, new funnels can be seen near the separatist trenches. 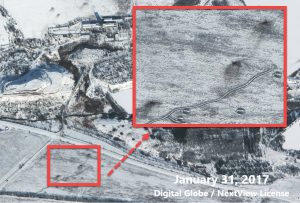 To the north-west of the water treatment plant, funnels can also be seen near the separatist trenches.

Apparently, the OSCE Special Monitoring Mission (SMM) observed several samples of military equipment that were captured on January 31, 2017. In its daily violation report dated 1 February 2017, the OSCE SMM in Ukraine describes several facilities that correspond to the equipment and locations observed in the satellite image.

On the basis of available SMM air surveillance data, on January 31, 6 towed artillery units with appropriate support vehicles and two tanks were found near Yasynuvata, as well as 3 towed artillery charters near the so-called “DNR” village. Yakovlivka (10 km north of Donetsk).

Unfortunately, satellite images of the Ukrainian government-controlled Avdiivka for January 29 are missing, making it difficult to find both firing positions in the area and tanks in residential areas. If there are satellite images showing the positions of Ukrainian forces after the escalation of the conflict on January 29, we will be sure to publish a review of firing positions and launch sites near Avdiivka.