Space shooting data recorded a difficult situation in the Kerch Strait caused by Ice Bayer. The ice is often in February-March, it goes to the Strait from the Azov Sea, accumulating near the islands of Tuzla and a whisker. The ice captured ferries that carry out the movement between the ports of the Caucasus and Kerch, Russian Vessel “Petrovsk” and Cyprus Skipres. 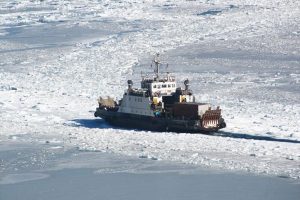 French spacecraft SPOT-6/7 has taken a shooting of this area. As shots from the satellite, a dam through the braid, which Russia began to build another 2007, has considerably complicated the natural drift of ice, the masses of which are growing in the daily daily basis, starting February 15.

At the same time, according to radar Sentinel space images, you can determine the provisions of Russian ships and two bulkers (under the banners of Cyprus and Belize), which are currently in danger.

In the port of the Caucasus, there is also a accumulation of motor transport, which can not get to the occupied Crimea.